As part of the Shift that so many have been heralding, there are currently many ideas and understandings re-emerging in our consciousness. Where do these understandings come from? Divine inspiration, yes. But I believe there is more to the whole story.

There are many people around the world who are simultaneously realizing and actualizing what may seem to be wholly unique and inspired revelations. They are each simultaneously and in their own ways, fulfilling them. These “new” concepts are somehow… encoded in the unity consciousness electromagnetic grid of human awareness.

Let me pause and take a step back.

Art is often a precursor of consciousness. We, as witnesses of art, are able to grant license to the artists of the world to inspire and move us. We let down our analytical guards. Music, films, paintings, and books often herald or usher further understanding in a way that is far more palatable to human consciousness. Artists can be or just are more fluid, open, eccentric in the communication of ideas, ideals, or messages. You know artists who feel that they are simply conduits. It’s an “open myself and the words come to me” kinda thing. I’ve been there. You’ve probably experienced it too. Elizabeth Gilbert is one writer who has openly talked about this in her work. Lots of people have, but she’s particularly relevant here. You can check out her 2009 TED talk: Your Elusive Creative Genius, to hear straight from her.

Recently, Gilbert wrote “The Signature of All Things.” It’s a striking novel that interweaves the deeply spiritual and the pure scientific of life to explore evolution. There is lots I can call out here that is relevant to this larger conversation (male brain v. female brain; duality; spiritual sex v. primal sex; etc.) but what is of key interest is that through the book, one learns that evolution, aka the “Survival of the Fittest” was discovered by at least three different people, in three remote parts of the world, relatively simultaneously, and in very different ways. And, interestingly, it was the fittest of the three, Darwin, whose name is now associated with the science and with global understanding.

Though this is historical fiction, it is truth in art. From what I understand, the same is happening now with a more astute comprehension of humans as spiritual light beings.

Also of interest is the work of Lyall Watson in “Lifetide: The Biology of the Unconscious,” which describes a 30-year scientific research project on Japanese monkeys. He tells how scientists watched wild monkeys to whom they gave sweet potatoes, but laid them in the sand. The monkeys didn’t like that sand. Finally one young monkey figured out that washing them made all the difference. Yum. So she taught the older monkeys, who then taught others. Then, at some point, when there was a critical mass of understanding (100 monkeys), all the monkeys on the island started washing their potatoes — even those who hadn’t encountered the original little monkey that started the trend. But of more interest, all the monkeys of this species across all Japanese islands started washing their potatoes on the exact same day.

What we can gather here is that we are all connected. There are few inspired souls among us who are the gateway to broader consciousness, be they artists or spiritualists or teachers. As the understanding spreads, so we all come to see. It’s beautiful really. 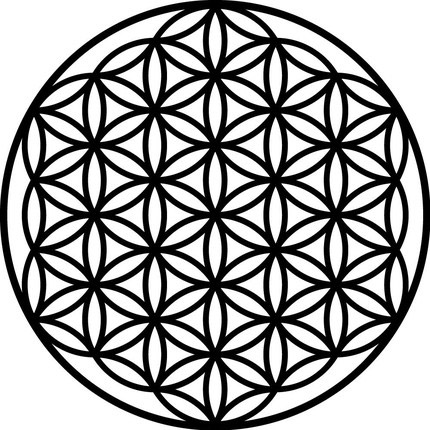 Let’s consider the Flower of Life. When it was first rediscovered, so many lifetimes ago and so many lifetimes from the ancient times when it was originally etched or inscribed on Earthen stones, it was all over the place. From Egypt to Norway to Peru. Somehow, ancient civilizations all over the world knew this symbol and honored it in their sacred spaces. Perhaps it was that those who came to help us originally from the Sirian system also visited these places. Perhaps. Or perhaps understanding of this symbol and its importance eventually actualized in the Universal Unconscious and those shamans and seers in cultures across the world pulled it and shared it. I cannot for sure say how it happened.

It is my understanding now (through my Guide), that it is time now for our consciousness to return to another symbol, that is associated with the Flower of Life, but somehow different. It is out there. It was scribed in ancient rock, just as the Flower of Life was. I’m told that at least some hieroglyphic prophecies of which “we” (those in the know, not me, by any means) are aware of include this symbol, but no one who studies these hieroglyphs that is currently alive clearly understands its meaning. There are ancient, historic writings somewhere that explain it, but it has not yet infiltrated current mass consciousness. Among other places, this symbol is in part hidden in the Dead Sea scrolls. I understand that this ancient symbol will be brought to the attention of the people who are “redeveloping” it now through divine inspiration. It’ll be after that that the symbol is more widely understood and accepted on a global, universal unconscious level.