This Every summer, my daughter and I go on adventures. When she was four, we road-tripped from Utah to fly a kite on the Oregon Coast. When she was five, we packed up the car and the dog and went camping at Joshua Tree in search of Dr. Seuss trees and desert sunsets. When she was six, we drove to a surf beach in California and camped in the rain for four days. Last year, we spent two weeks exploring sections of four states in the mountain west. This year we ventured out on the Great Waterfall Quest of 2018 and headed to the Washington Cascades to find the hidden treasures that gave the mountains their name.

One day, halfway through our trip, we found ourselves in an unexpected place. Access to the campground we were trying to get to had been closed by a landslide. We learned of this from a friendly man and his 11-year-old son who were visiting hosts at the place we’d been camping in the Gifford Pinchot Wilderness. He suggested we move to their home campground and explore from there instead. The promise of a new place to stay for the busy weekend made it appealing, so we went.

Before our trip, I’d mapped out several adventures and waterfalls for us to go find that would be near where we’d be. Now, without a plan, I turned to the gazetteer. I found a waterfall relatively nearby that was off the beaten path but looked accessible.

One thing to note is that late summer is not peak waterfall season. Spring rains and run-off make that season the one for falls in all their glory. And the name of the waterfall that I’d located on the map, Parched Creek Falls, gave us little reason to get our hopes up. We had no better plans for the day, though, so we went for it. We followed a lonely paved road the width of a rail trail or a nice wide sidewalk. We’d seen a few of these before. They are access installations in the National Forest. I followed the contours that I saw on the map and found where I thought the falls might be. We eventually found the creek. We saw a fire ring in a little clearing off the road, and then a trace of a trail leading off, so we followed it. On the map, the falls were right off the road. That was not the case. And the trail was so indistinct, with major giant tree-fall over it, that I was thinking of suggesting we turn around. My daughter, though, was having a great time way-finding, crossing the creek, and climbing over the giant fallen trees. Because she was having so much fun, I just followed along happily. “This may not lead to a waterfall,” she said, “but it will lead somewhere!”

One mile and 45 minutes later (to give you an idea of how challenging the trail was), we heard the rushing sound of falls. We had found them! The trail ended in a box canyon that created a natural, greenscaped grotto with a hundred-foot cascade spilling over the edge of the cliff high above. It was as breathtaking as it was tucked-in and secret. I was inspired to take a panoramic photo to capture the full beauty of the scene all around us… and that is when we saw her.

She is a spirit that serves as the guardian of the falls and that part of the forest. You will see her in this photo. She is very tall, and you can make out her shape and that she is holding a staff or baton of some sort with a round head on the top, with very distinct almost a yin-yang design in it. Of course, it’s not a yin-yang, but it similarly invokes the idea of balance.

When I asked how long she had been there, I simply got the answer 2222222… An infinite 2. This, according to numerology (I had to look it up), means feminine, balance, harmony. I asked if she had once been human, and the answer was no, though she is seems to be in somewhat of a human form. I asked if she represented Gaia and the answer was no but that she works very closely with the energy of Gaia. I asked if I might get another picture of her, if she would allow it, in which she presented herself more clearly. She agreed. All of a sudden a gorgeous brown butterfly flew down and landed at our feet. I had never seen anything like it, but then again, I had. Maybe in a book or in a dream? I took the picture and the butterfly flew around us and then away and we didn’t see her again. 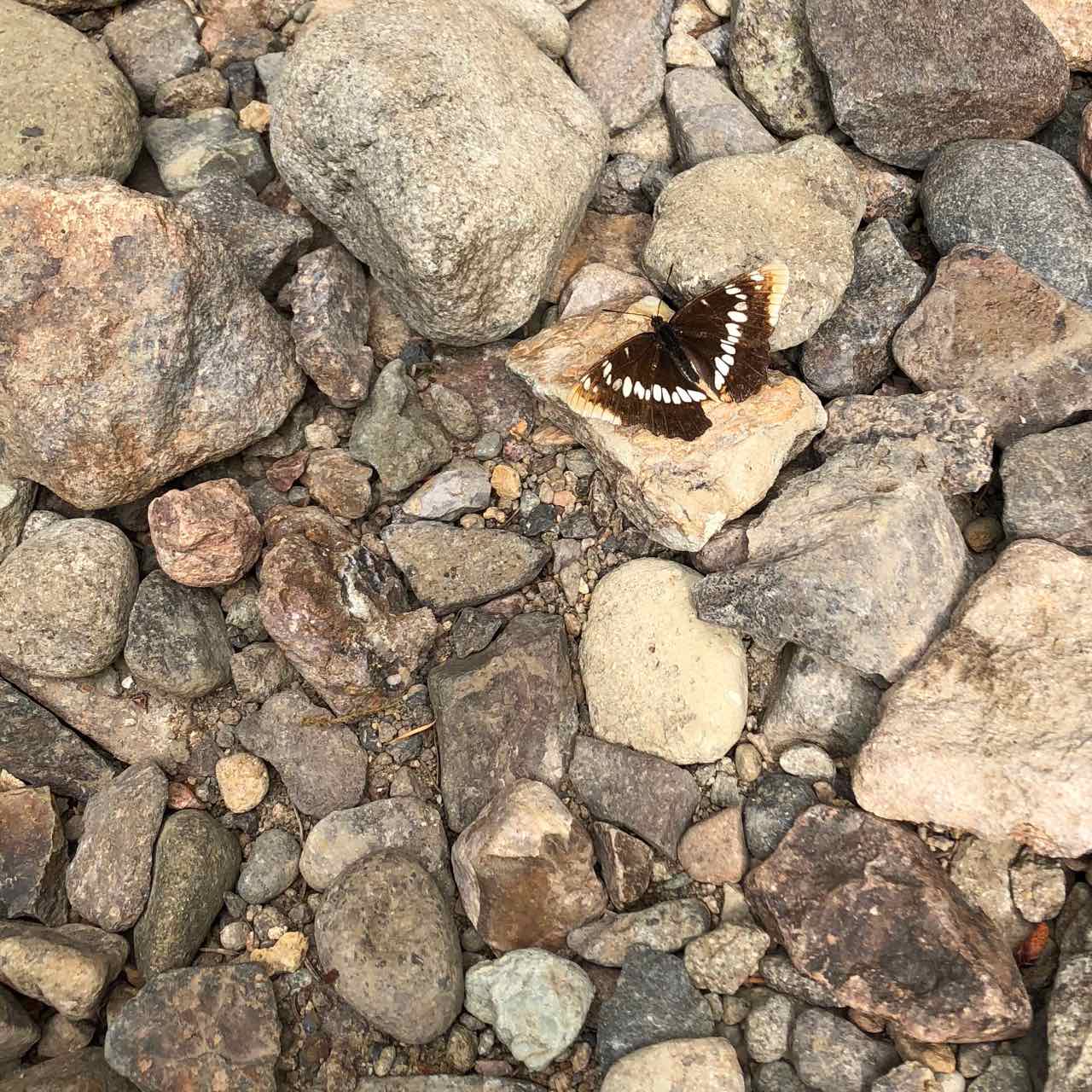 We spent an hour our so at the falls, then thanked the guardian and the Universe for leading us to such an amazing place, and made the scrambling hike back. It was my favorite day of the whole trip.

When we got home, I was in my daughter’s room and bumped my head against one of the little butterflies I’d made for her before she was born to hang from the ceiling over her crib. When I looked up at it, my heart skipped a beat. The little felt butterfly was brown with white dots and just a touch of orange-yellow. There it was.

I share this with you just as a reminder. There is more to this world than meets the eye. And sometimes when the magic does meet the eye, you just need to give yourself permission to see it.